The wooden tanto from scrap wood pieces. The tanto is made as a gift to a friend of mine.

I wanted to give him something nice in return, so I laminated the red oak in between two white oak pieces. I have never seen a tanto made this way, but hey - thats what I do. Trying out new things.

Traditionally a tanto (as far as I can google and as far as I have experienced) is made from some kind of red or white oak.

This project was a lot of fun. Nothing serious really. I just laminated, then used a band saw to cut the size. Then I used a couple of planes to get the shape before sanding it. I used a "store bought" Tanto as a template.

This is not the first Tanto I have made. I have made a couple more in the past, as gifts when anyone in my club gets his/hers first black belt, I have gifted them with a hand made Tanto. We use them (jujitsu) when we practice self defence. 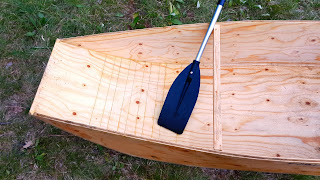 Regarding the one sheet plywood boat

Here is some more pictures, and a link to my Instructable for more details how I build this boat. And the link to the Instructable for a step-by-step process https://www.instructables.com/id/One-Sheet-Plywood-Boat/ Thanks for visiting! :-)